Constants and Basic types of Constants

Constants in C refer to fixed values that do not change during the execution of a program, i.e once the value is declared, it is not changed throughout the program. C supports several types of constants as shown in he figure 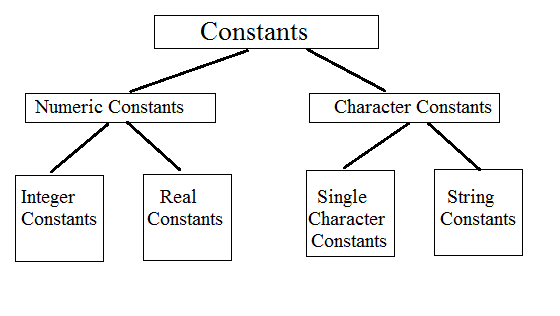 The following are the four basic types of constants.

An Integer constant refers to sequence of digits with out decimal point.

An integer constant can be represented in any one of the following three number systems.

They consists of a set of digits, 0 through 9 without decimal point or fractional part, preceded by an optional - or + sign. Embedded spaces, commmas, and non-digit characters are not permitted between digits. They cannot exceed minimum and maximum bounds.

They consists of any combination of digits from the set 0 through 7, with a leading 0.

A sequence of digits preceded by 0x or 0X is considered as hexadecimal integer. They may also include alphabets A through F or a through f.

A through F represent the numbers 10 through 15.

The largest integer value that can be stored is machine dependent. It is 32767 on 16 bit machines and 2147483647 on 32 bit machines. It is also possible to store larger integer constants on these machines by appending qualifiers such as U, L and UL to the constants.

Integer numbers are inadequate to represent quantities that vary continuously, such as distances, heights, temperatures, prices and so on. In such cases real constants are used.

The real constants could be written in following two forms,

These quantities are represented by numbers containing fractional part like 17.548. Such numbers are called fractional form of real constants.

Rules to construct real constants which are expressed in fractional form

In exponential form of representation, the real constant is represented in two parts. The part appearing before 'e' is called mantissa, whereas the part following 'e' is called exponent.

The mantissa is either a real number expressed in decimal notation or an integer.

Rules to construct real constants which are expressed in exponential form

A string constant is a sequence of characters enclosed in double quotes. The characters may be letters, numbers, special characters and blank spaces.