Binary operators are the most basic and common operators. These operators require two operands and an operator between them.

The following table shows the binary operators and their meanings :

A String is a sequence of characters that is treated as a data item.

The group of characters, digits, and symbols enclosed within quotation marks is called as "string". The sting is always declared as a character array. To manipulate text such as words and sentences normally strings are used. Every string is terminated with '\0' (NULL) character. The NULL character is a byte with all bits at logic zero. Hence, its decimal value is zero.

The common operations performed on character strings include :

In passage of text, individual words and punctuation marks are called tokens. Similarly, in a C program the smallest individual units are known as C Tokens. C programs are written using these tokens and the syntax of the language. C has six types of token as shown in the figure. 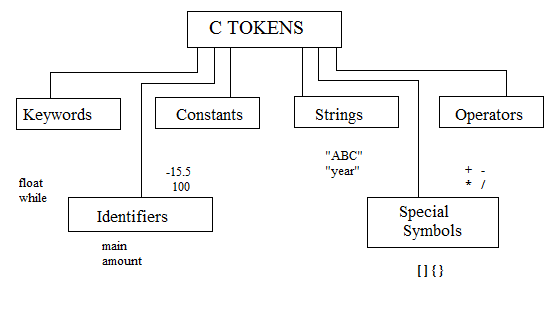