Structure of a C Program

C is a Structured Programming Language.

A C program in general, consists of various sections as follows: 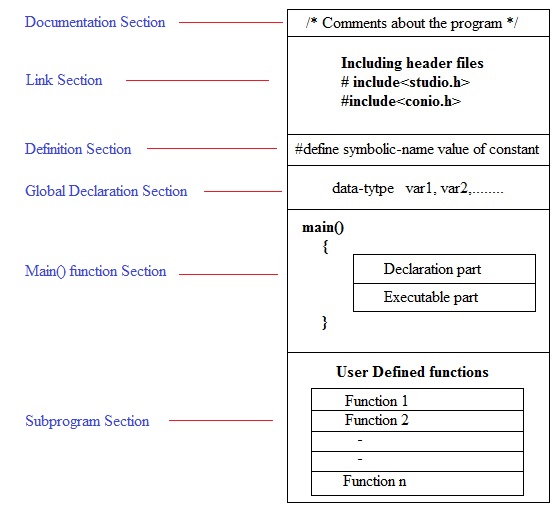 To enhance the readability of the program, programmers can provide comments about the program in this section, the comments are included between the delimiters /* and */.

These statements are not executable rather they are ignored by the compiler, but too many comments should be avoided.

In C comments can not be nested. We can not write comments with in comments.

Example : /* program for printing a line of text */

The Link Section provides instructions to the compiler to link functions from the system library.

A C program depends on the header files to a great extent. A header file contains the information required by the compiler, which calls the library functions used by the program during compilation. A header file has an extension of .h. These files are included in the program using the preprocessor directory #include .


stdio.h is the header file for the library function printf().

There are some variables that are used in more than one function. Such variables are called global variables and are declared in the global declaration section that is outside of all the functions.

Every C program must have one main() function section. This section contains two parts, declaration part and executable part.